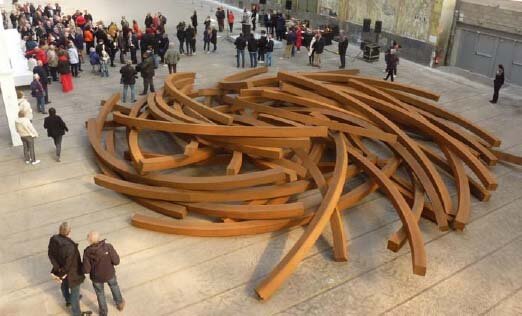 is the internationally-renowned French artist’s largest and most comprehensive retrospective in the world to date, spanning the entirety of his complex and widely diverse oeuvre as a sculptor, painter, performance artist – and radical conceptual artist. The exhibition will bring together over 150 works, reflecting the artist’s uncompromising approach and natural obsession for constantly shaping his environment through his art. On view from January 29 – May 30, 2022, the show is the first in a series of exhibitions to unfold over the next two years in the Kunsthalle Berlin across the spectacular hangars 2 and 3 of Berlin’s emblematic Tempelhof Airport.

Organized by the Stiftung für Kunst and Kultur, curated by Walter Smerling, Bernar Venet, 1961—2021 charts the trajectory of the artist’s career from his very beginnings in his studio, which was made available to him by the French army during his military service, and which form the cornerstone of a body of work that has repeatedly called itself into question. Venet has consistently affirmed his concept of art as an attitude which extends far beyond the formal and the spatial. His aspirations to this day are firmly rooted in the unbounded desire to simply never accept the world as it is, instead lending it his own perspective. Landscapes and spaces suddenly assume